← more from
ESP Institute
Get fresh music recommendations delivered to your inbox every Friday.
We've updated our Terms of Use. You can review the changes here. 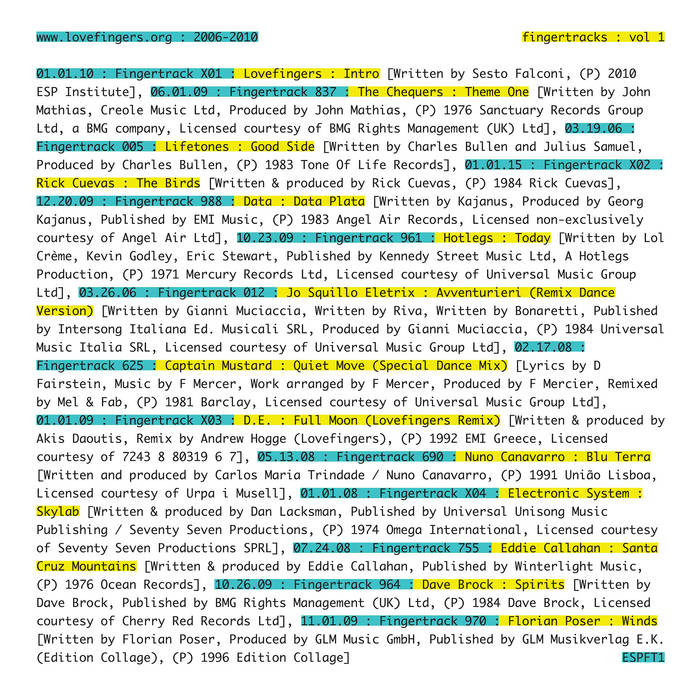 virtue_signal Psych rock heaven. I can't believe how good this compilation is. Favorite track: THE BIRDS.

In 2006, the musical landscape was very different; there was no streaming, “shazam" was a word used by magicians, and "all-access” was not granted to the general public. Social media, as we know it, was in its infancy and today’s constant digital feed of interruptions, notifications, refreshes and “likes” didn't yet exist. Those with a thirst for the overlooked regions of the record store had to quench themselves in the climes of the online world's music blogs, and while that digital community was surely expanding, NYC’s lovefingers.org was something different. Not a blog but a daily unfolding mix — no opinions, reviews, or backstories were coupled with the music, no full albums or submissions from the outside — it was a mysterious watering hole in the burgeoning digital desert where rogue tracks from Wally Badarou rubbed shoulders with those of Holger Czukay, the drama of Sylvester juxtaposed with the quirkiness of Hosono, and countless other coveted artists’ unearthed gems melted in one pot, a digital space where $1 thrift store scores could easily breathe the same dusty air as cosmic holy grails, oddball psychedelics and proto-electronica b-sides comfortably cohabited with $300 private-press folk rarities. With 1 track per day, Andrew “Lovefingers” Hogge created a truly democratic and educated selection of music for our aural pleasure, and labelled them ‘Fingertracks' (numbered 001-999).

This was before most things we now take for granted were common on our dancefloors, radio shows or live streams. Those ubiquitous Euro Pop dubs, unclassics that aficionados play at the wrong speed, or private gems that have since been reissued to the moon and back? Many of them popped up on our collective radars via the medium of lovefingers.org first. Rightfully so, what started as a well-kept secret, became a go-to resource and mark of quality among enthusiasts, diggers, DJs, musicians and producers around the globe — the genre-bending mentality in turn re-coined the term “selector” — and inspired a generation the world over to delve further into record shelves, undoubtably contributing hugely to the wondrous, multi-faceted and open-minded musical language we now all speak fluently. While it remained niche, at its peak, lovefingers.org had upwards of 100K music freaks turning up daily, and ignited a global musical dialogue between people that were yet to be connected by today’s social technology. The site received countless letters of appreciation from rural kids with no access to record stores, acclaimed DJs, film directors, fashion houses, forgotten artists who were thrilled to feature among unexpected peers, soldiers who diligently tuned-in direct from their call of duty, even heroes of sample-scavenging culture like Coldcut who applauded, “…it just goes to show, when you think you’ve heard it all, you can always dig deeper.”

The community around Lovefingers’ site was a call-to-action, gathering analogous minds and inviting them all to the same party, and on New Years Day 2010, after 999 Fingertracks and a plethora of (now classic) mixes, the site made a final post stating, “That's all folks!” The collective energy pivoted into the ESP Institute, a record label and art platform to champion new artists who emerged from this foundational community and as a catalyst to push the musical dialogue forward. Now, as the ESP Institute approaches its 10-year anniversary, we revisit the significant role lovefingers.org played in shaping where we are today.

'Fingertracks Vol : 1' is a snapshot of aural delights that were on offer to those of the leftfield persuasion, all who discovered the site and tuned-in for their daily shot of sonics proper — a lovingly selected handful of records that re-introduce the story of Andrew’s most influential and essential music resource. The track list is classic Lovefingers, an insight into the free-flowing nature of the daily Fingertracks, context-free but connected through creative threads and energies — lo-fi loner jams brush up alongside sleazed-out Italo powerhouses, Greek new age obscurities tussle against overlooked Hawkwind-related cuts — nuggets that may be more known to the heads now, but whose initial excavation can be accredited to Lovefingers’ site, and are essential to its story nonetheless. Rumor has it that this is merely the first volume in a series, so as it turns out, and gladly so, “That’s not all folks!”

Bandcamp Daily  your guide to the world of Bandcamp

sndtrak stops by with an Album of the Day Feature of his most recent release, FLIPS V1: Triple Lindy